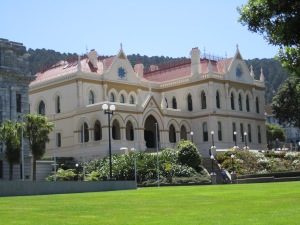 Parliament, where I debated the tour guide

The trip from Wellington to Picton is approximately 3 hours in length, so this gives me an opportunity to reflect on my trip thus far and note things I haven’t mentioned in my previous posts . . .

So, I will first start off with a fortune cookie message that I received at Panda Express, LA Airport. By the by, the late meal I ate there was forgettable and I am surprised that it didn’t keep me up during my trip to the Fiji Islands (2nd leg of my trip to New Zealand). The fortune cookie message read, “Your personality is fueled by the fascination you feel for life.” This blew me away. I am going on the journey of a lifetime and I receive a message like that. WOW! I have kept it in my wallet as a good luck talisman ever since receiving it.

The “Beehive” where Parliament also meets

When I left Auckland, I saw a bird that ran across the motorway I was on. I keep forgetting to ask someone what type of bird it was. Roadrunner? Not certain. Also, during that same drive to Waitomo, I saw a hawk eating carrion on the side of the road. As I drove by (slowly), the hawk didn’t fly away, despite the proximity of my vehicle. The bird connection continues with a rest stop I made in some small town before arriving in Rotorua. While eating my lunch (grapes, Pasta salad, plum, and sandwich), these Sparrows stopped at my feet, literally a dozen or more, with absolutely no fear. Obviously, they were hungry, and were waiting for me to give them a handout. I threw some grapes on the ground, but New Zealand Sparrows are picky eaters and wouldn’t touch the grapes. So, I tried part of my sandwich and they loved it! Anyway, those are my bird stories. 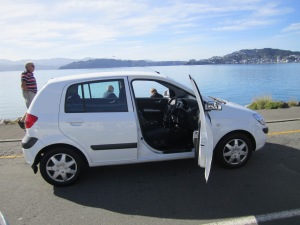 Hyundai “beast” rental waits patiently to board the ferry

As quite a few of you know, I don’t drink and I haven’t for many years. I rarely make a big deal out of it, nor talk about it too much. Suffice to say, drinking and drugs caused a problem in my late 20s, when I was unable to process/deal with my brother’s death.

Me on the ferry 🙂

However, I digress . . . To keep spiritually fit, I attend meetings of Alcholics Anonymous and I have attended two meetings thus far in New Zealand. One meeting was in Palmerston North and the other was Friday (yesterday) in Wellington. At both meetings I met wonderful people and at the latter meeting, I went out for dessert and coffee with Alan, Joe (female), and Kay. The restaurant or bistro was called Fidel’s and it had a silhouette of Fidel Castro smoking a Cuban cigar. Fun place! All sorts of interesting meals, desserts, coffees, and wine was served there. I ordered a sort of a “quiche” blueberry and apple pie. It was excellent! This was actually the longest I have stayed out at night in New Zealand thus far. In fact, we closed the place (Ha. That aspect of “closing places” was something I did quite often when I use to drink). Alan was a “newcomer” to AA, having quit drinking only a couple of months ago. A fascinating person, he is an animator and worked on the recent film, “The Hobbit.” He has worked on a number of other Hollywood movies as well. 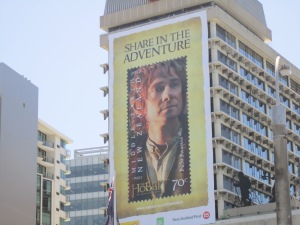 The Hobbit, a film Alan worked on

Kay and Joe were quite interesting too. I didn’t say too much, since I was interested in listening to their opinions and impressions; although, I was asked quite a few questions about the United States and especially, my trip. I really enjoyed myself at both AA meetings and going out with a few of the Wellington members at Fidel’s afterwards.

Coast line of S. Island (we went through this narrow channel)

So what are my impressions of New Zealand thus far?

The New Zealand people will literally give you the shirt off their back if you need assistance. They are very polite, well spoken, and somewhat reserved. Generally, they dislike arrogance and show offs. Apparently, some of the people south of Auckland perceive Aucklanders as full of themselves. They actually have a label for it, the “Tall Poppy,” i.e., when someone brags about themselves, they are fair game to being made fun of and cut down a peg or two.

I also must mention something else that struck me as hilarious. Specifically, the two tours I was part of – Waitomo Glow Worms and Wellington Parliament tours – where both lady tour guides reminded me of Catholic nuns. Umm, the type that had rulers for cracking your knuckles if you mis-behaved. Why? Even though they asked everyone if there were any questions – God forbid you asked one. Both women took relish in asserting their authority and seemed to put you down when answering your question. Consequently, not too many questions were asked. Well, except for me. Grin.

For example, I asked the Parliament tour guide why the “Upper House of Lords” was disbanded and she really couldn’t answer the question, except to say, “They did not accomplish anything.” When I asked why they didn’t accomplish anything, she answered my question with a question, “Why do you think they didn’t accomplish anything?” I almost gave her a smart ass answer, along the lines of, “Well, that’s why I flew half way across the planet to attend this tour and find out why you people fired the Upper House of Lords.” Instead, I said, “They were rich and they didn’t think this gig actually involved work,” which on reflection, I guess is an equally smart ass response as well. Anywho, she gave me a wry all knowing pinched smile and hurrumphed something under her breath. LOL. 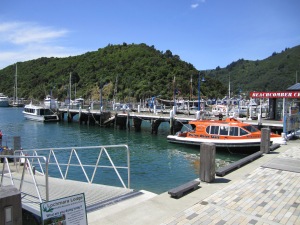 What else? I really miss Cindy. I was uncertain about mentioning anyone in a personal way on my blog. But I would be less than honest if I didn’t say something about her. She is someone I recently met prior to my trip and quite truthfully, we had a lull in our relationship, where I thought she wasn’t interested in me, nor she thought I was interested in her. Consequently, we didn’t see each other for almost three weeks before I left on my RTW trip. It’s a miracle that we were able to bridge this misunderstanding.

Maori songs being sung by these women

Cindy is a lot of fun, quite intelligent and balances out my introspection and seriousness. She also is quite tall; short blond hair that I love (don’t let it grow any longer as you indicated you might do); sexy and an all around beautiful gorgeous woman in my eyes. I have no idea why she likes me, but hopefully she doesn’t come out of her coma (grin). where she asks herself the same question. Seriously, I hope we can nurture the friendship we already have into something more . . . I sincerely apologize Cindy if what I wrote here embarrasses you. 🙂

I also miss my good friend Leah, who is the one woman mentor I trust to always give me an honest answer, especially about things I am clueless about, e.g., women. I hope you are well my friend!

Gary, I hope you are well too. Thank you for everything you do. Oh, don’t forget to pick me up at the airport in 5 months. Ha.

Last, but not least – a big hug to my mom and Dennis. I love you both! Please give a big hug to my favorite female (dog version), Shasta. I will definitely see you all before the end of August. 🙂