I don’t expect anyone to believe this story, but here goes  .  .  .  Yesterday, I posted a blog thread about having my wallet stolen on an Athens Metro train on Thursday. The Athens Police indicated that there was a chance (snowball chance in Hell?) the wallet would be found and returned. They added, “Usually the cash is taken and the other stuff is left alone.” Guess what? I got my wallet back with all personal affects, including my Colorado Driver’s license, Visa credit card, credit union debit card and SCUBA Dive Certification card. Oh My God! 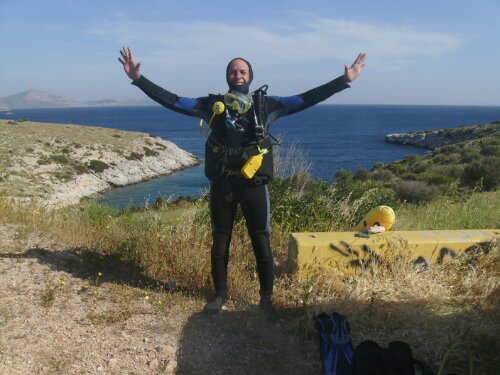 I woke up this morning and although I had moved on “intellectually,” more or less accepting that my wallet was gone and I would have to go through the bureaucratic process of getting a new driver’s license, SCUBA dive card, Health Insurance card, etc. , etc. I was resigned to the fact that I would be doing this crap when I returned to Colorado next month. Ugh. Emotionally though, I was still processing everything. One person that commented on my blog yesterday, said something about being “violated” and I guess that’s how I felt, as well as being a bit depressed. It almost felt like a hangover. Sigh.

Then my phone rang. It was the hotel reception desk and they asked me to come down to the front desk. The Lotus Hotel has been wonderful during my stay in Greece and even sent up some fruit last night when they heard that my wallet had been stolen. I had no idea about what they wanted, so I dressed mechanically and went downstairs. I knew the hotel desk clerk by name and said, “What’s up Anna?” She said, “There is a gentleman here to see you” and pointed to someone sitting in a chair across the room from us. I went over to him and said hello . . . He asked me, “Are you Steven Joseph Melikean?” I said, “Yes, I am.” At that point, he handed me my wallet. Damn! I immediately teared up and told him to wait here. I ran upstairs to my room and looked for whatever cash I had, grabbed it and ran downstairs. 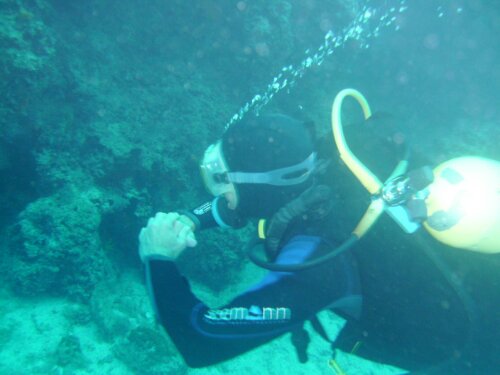 I told him, “Thank you so much . . . You have no idea how much this means to me.” I then tried to give him the money I brought with me from my room and he emphatically refused. Wow! I again tried to give it to him, but he was steadfast and again, refused the reward. He spoke in Greek to Anna and she interpreted for me – saying, “Steve, he is happy that he was able to help you. He wants nothing in return. He wanted to return it yesterday when he found it in the metro station, but he had to work and didn’t have an opportunity until this morning before he goes to work” I again thanked him and hugged him. I was really tearing up and repeatedly thanked him. I asked him his name and he wrote it down for me, Tzonny Sipsas. I did the same. I was obviously in shock. I was overcome with emotion and so grateful to this stranger who had taken time this morning – before going to work – to return my wallet. Wow! We said our goodbyes and as I went back to my hotel room, I said a prayer of thanks to God.

The day before my wallet was taken, was one of the best days I spent in Greece. Manos Vlandis, Diving Instructor (Master Diver) met me at the Acropoli Metro Station and took me to his dive shop, where we picked up dive equipment, then went to his house, where he picked up some additional equipment, including an underwater camera, for taking these photos I’ve posted on this blog thread. During the drive, I knew I was in good hands – because Manos was asking me questions about my dive experience. Admittedly, I hadn’t dived in quite a few (9-10) months, since last year in Panama during my Central and South American back pack trip. In short, the questions in regard to underwater signs and other safety related information, I failed miserably. Nevertheless, by the time we arrived at the dive site, I was grilled sufficiently, where I was relatively confident about the “refresher” safety training he gave me. Manos knew his stuff and expected anyone diving with him to know exactly what was required during the dive and equally important, he expected other divers to set up their own equipment (unlike Master Divers in the Caribbean). In short, this was good experience for me and it took me back to my initial dive certification experience, where the divers didn’t have anyone baby sitting them.

The small bay we would be diving was called, “The 3rd Bay Of Vouliagmeni.” After donning our equipment, we walked down to the wharf, where we entered the water and although I had some trouble equalizing my ears, we descended to 18.9 meters and I was struck by two things: 1. It was frickin’ cold – less than 14 degrees C; and, 2. the water clarity was on par with the Caribbean. The aquatic life was mostly squid (I think) and quite a few smaller fish. The coral and rock walls were spectacular. We also swam across sea grass for stretches at a time. For anyone who has dived, it is quite an experience to be able to dive alone, with only a Dive Master and no one else. Obviously, the Dive Master is able to focus on one person, which makes his job much easier. He also is able to point out interesting fish and other aquatic life to you. For a diver, you are much safer as well, because if you get in trouble, the Dive Master is focused on you and no one else. Most divers have heard the term, “cattle boat” which essentially means that there’s going to be a lot of divers going down with you and at least for myself, it takes away from the enjoyable experience of peace and solitude you feel while diving. In short, you don’t bump into someone every few minutes. Manos and I stayed down for about 36 minutes on our first dive.

We came to the surface and exited the water. Manos then brought down two more full tanks and after taking a sufficient (safety) break on shore, we did our 2nd dive. Again, it was quite cold and frankly, by the end of this dive, I was uncomfortable. I found out later that Manos had a 7 mil. wet suit, as well as a 3 mil. wet suit vest over his main suit. Hmm. Meanwhile, I had a 5 mil. wet suit with a 3 mil. wet suit vest. Sheesh, no wonder he wasn’t freezing like I was. However, he did give me his gloves during our 2nd dive. Smile. Like I said, by the end of this dive, I was happy to be out of the water. I could barely control my fingers, while removing my gear. It was that cold.

I have only shore dived once before – diving the Cenotes of the Yucatan Peninsula in Mexico, near Playa Del Carmen. All in all, this was an excellent experience for me. If you are reading this Manos, thank you very much for an enjoyable time! The hot chocolate was delicious afterwards as well! 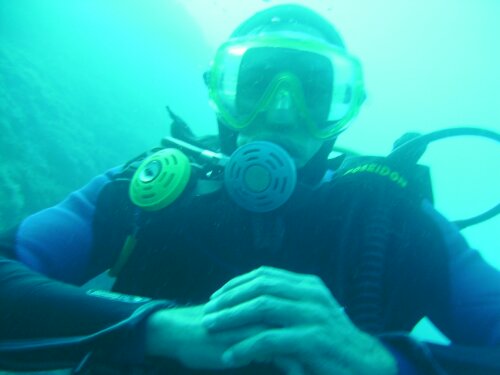