St. Peter’s Square. Papal apartment is part of the Basilica.

I was so paranoid about losing my wallet to a gang of thieves that I took extraordinary precautions on my flight to Rome, Italy. Better safe than sorry, right? As many of you are aware, i had my wallet stolen in Greece  .  .  .  and then returned by a good Greek samaritan. Still smiling about the way that turned out. The flight itself was smooth as silk. In fact, the plane was less than half full, so I moved to an exit row and met a delightful young Greek lady, Constantina (I hope I spelled it right, because she has my blog address). She was very interesting and also, helpful when she introduced me to an Italian gentleman, Luca (also on the flight), who provided me with very good directions to my hotel via the airport train and Rome subway (metro) system. Constantina is searching for work in Italy (Milan) and I hope she is eventually successful in finding a job here in Italy. Good luck Constantina!

This young Greek gave a classical music recital at the Athens airport while we were waiting for our flight to Rome. He was outstanding. 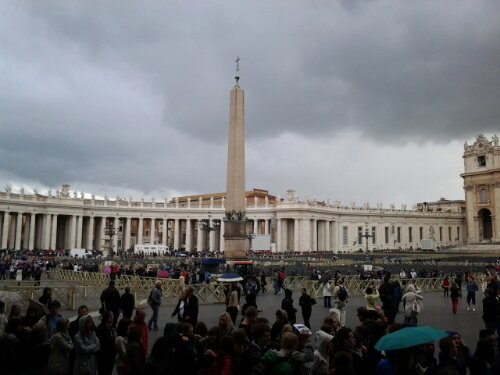 This Egyptian Obelisk is 4 thousand years old and was once part of Emperor Nero’s Roman Circus. A pope had it moved to St. Peter’s Square in 1568. 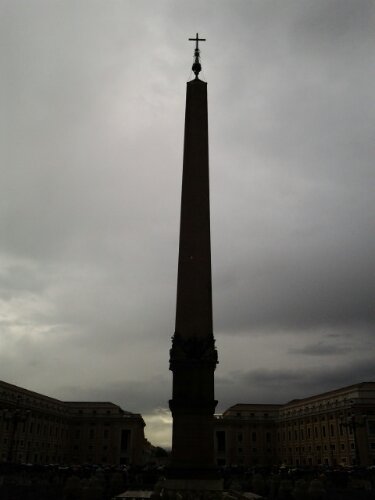 Storm clouds are angry and the obelisk is in shadow. I left after taking this photo as the rain was coming down hard.

Finding the Nautilus Hotel after exiting the subway system was fairly simple and straightforward, although I sort of complicated it a bit by taking a circular route. I got to my room at around 7pm and was quite hungry, so I asked the reception desk person if he had any suggestions. He recommended a place called Nudo E Crudo Ristorante. After washing up and unpacking my back pack, I headed for the restaurant. I wish I would have taken my tablet to the restaurant to take a couple of photos of the meal and the restaurant too, because it has a nice ambience (almost romantic, so it was wasted on this solo traveler. LOL.). The meal I had was outstanding  .  .  . I started with a mixed salad, which was huge and had at least a dozen baby tomatoes (cut in half) and various other salad mixings. Everything was fresh and I will probably go back to this restaurant just for the salad. My main entree was linguine with baby clams and shrimp in a light white wine sauce. The meal came with fresh french bread (plenty of it) and I ate everything. I was famished, so I also had dessert – Sicilian Pistachio ice cream, sprinkled with real chopped pistachios. All in all, this was one of the best meals I have had in weeks. In fact, I thought so much of it, that I just wrote a TripAdvisor review about this restaurant. If you are in Rome, in the Prati district (near the Basilica), go there. You wont be disappointed.

Main fountain in the square.

Today – my 2nd day in Rome for those keeping score – was wet and cold. In short, a bit dreary and not a good day to go out. However, I only have a few days in Rome, so I went to Vatican City and took a few photos before calling it a day. I scheduled a tour for the museum and basilica, but canceled when the weather got significantly worse. I may try to go on this tour tomorrow, since I understand it’s excellent and something not to be missed. We shall see. Instead, I decided to have a low key day and I explored near my hotel. I stopped at one cafe and had a cafe latte, while I waited for the rain to stop. It finally eased up a bit and I ended up going to a market, where I purchased some proscuitto, coppicola, cheese and french bread to take back to my room, where I relaxed for the rest of the day. Take care, Steve 🙂 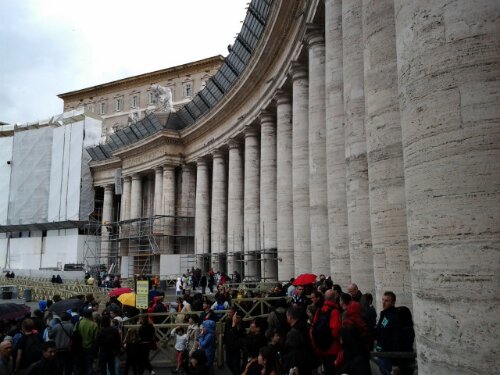 Line for the tour was unbelievably long, at least 400-500 yards in length. A primary reason to be on a tour, where you skip this line and maintain some semblance of your sanity.

These chairs are for those seeking an “Audience” with the Pope. In short, you wont be one on one chatting with him (grin). Instead, you’ll be amongst hundreds of pilgrims attending his weekly address (prayer). Many Cardinals also make an appearance.